Nosy Komba (Lemur Island) is a small volcanic island just southeast of Nosy Be, where a pretty village called Ampangorinana sprawls along the northern beach. It is an enchanting spot, with amiable inhabitants going fishing when tourists are not around (which is apparent by the abundance of tattered fishing nets and old wooden skiffs scattered about the beaches). The secret of its tourist boom: the 5000 black lemurs resident to the island (these are sacred and thus safe from any danger). The combination of the small volcanic island's close proximity to Nosy Be, the nearby holiday hotspot, and the resident population of adorable and far-from-timid animals has made it the nation's most visited "wildlife" attraction.
Between Nosy Be and Nosy Komba there is a tiny dream islet called Nosy Vorona
(just 50 x50 m large) ideal for switching off the world and just doing nothing but simply enjoying peace, sunbathing, snorkelling or kayaking. On Nosy Vorona there is only a lighthouse and a two welcoming guesthouses with several rooms and a charming bungalows. The whole accommodation is superb, ecological and really cosy.


© MauritsV Hell-Ville (Andoany) is a somehow decaying colonial town and the administrative centre of the island, as well as its main port. The city is characterized by beautiful restored colonial buildings along the sea promenade, some of which were built early in this century and a covered market which give reasons to hope that efforts are made to prevent the architectural decay of the town. In the upper part of the port, old cannons dating back to the time of the pirates watch over the harbour. For the best sunset-viewing setting climb the hill where the old hospital was built. The sea gets dotted with white sails when the fishermen’s launches come back to port.


The port
Being an island there are only two ways to arrive and leave - by boat or by plane. Most of the islands close by are only served by boat. Besides the ferry one also can negotiate with the local boat operators to be taken to one of the other islands. Most of the traffic from Hell Ville will probably go to either Nosy Komba or Nosy Tanikely the resort island which can be reached from here.

The market
The market is a very coloured place, above all in the afternoon when farmers come from the Great Land (the continent or Madagascar for the people who live on the island), carrying their load of vegetables. The fishermen also come back to the harbour to sell the fish they caught in the archipelago’s waters.

Russian monument
In memory of a naval ship that sank of the coast of Nosy Be in 1904 with many Russian soldiers that drowned in the Indian Ocean. 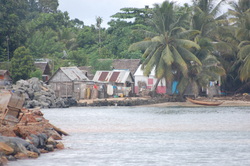 Ile Ste Marie, or Nosy Boraha, is a narrow granitic island 57 km long 8 km off the east coast of Madagascar. It is composed of a main island and several small islets. Its lush vegetation interspersed with many small villages, the kilometrical sandy beaches shaded by coconut palms, its bays and coves protected by coral reefs have turned this tropical dream island in is one of the most popular beach spots Madagascar has to offer. An atmosphere of peace, tranquility and pure natural beauty prevails on the island, a feeling definitely emphasized by the joie de vivre of the Malagasy. Cycling is the most popular means of transport of getting around. Another way to move further is on board of a traditional pirogue. It can take you to beautiful deserted little bays overgrown with tropical vegetation. Sainte Marie boasts numerous stunningly beautiful beaches and secluded coves, fringed with coconut palms. Most hotels are along the coast south of Ambodifotatra, where the beach is narrow but pleasant. The north-western part of the island is quieter, but more difficult to access. The east coast is relatively rugged and - until recently - undeveloped. It offers some of the better beaches, particularly on the Ampanihy Peninsula, which is separated from main island by the long Baie d'Ampanihy. A big warning: swimming in the beautiful turquoise the lagoon is not easy, due to the shallowness of the water. The best swimming beaches are located in the Northern and Western coasts, as well as in the islet aux Nattes.

How to get Madagascar
​

The only one touristic-friendly way to get Madagascar is by air.

There is no passenger ferry from Africa, Mozambique, and Tanzania.

Ivato International Airport (TNR) is the main international airport of Antanarivo, the capital of Madagascar.

The airlines that provide flights to Madagascar are:
For Indian Ocean travellers:
There are no direct flights from the United States of America and Canada. The best solution is to get Europe and then order a flight to Madagascar.

The best hotels of Madagascar you can find on Booking.com and  TripAdvisor